I wanted to do a blog about homemade ice lollies, but given the rubbish weather thought that was a bit pointless…  So instead I have opted for vanilla panna cotta with raspberry sauce, which still feels quite summery but also creamy enough to cheer up a rainy day/evening.  It’s the first time I’ve made it and yes – it is as quick and easy as the recipes claim!   You need ramekins for each serving.  I used vanilla essence instead of a vanilla pod as they were very expensive.  My friend used Dr Oetker Vege-gel (which she bought in Sainsbury’s) instead of gelatine and this worked fine apparently.  Recipe serves 5. 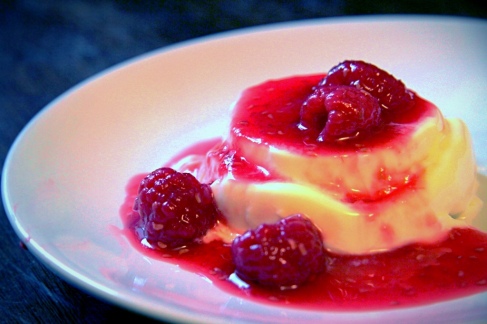 Here is my slightly simplified version of the recipe (originally from http://www.bbc.co.uk/food/recipes/vanillapannacotta_87907/ ):

For the panna cotta

For the panna cotta, soak the gelatine leaves in a little cold water until soft.  Place the milk, cream, vanilla essence/vanilla pod and seeds and sugar into a pan and bring to a simmer. If using a vanilla pod, discard at this point.  Squeeze the water out of the gelatine leaves, then add to the pan and take off the heat. Stir until the gelatine has dissolved.  Divide the mixture among four ramekins and leave to cool. Place into the fridge for at least an hour, until set.

For the sauce, place the sugar and water into a pan and bring to the boil. Reduce the heat and simmer until the sugar has dissolved.  Take the pan off the heat and add half the raspberries. Using a hand blender, blend the sauce until smooth.

To serve, turn each panna cotta out onto a serving plate, by dipping the base of each ramekin in boiled water, gently sliding a knife around each of the panna cotta and turning it out in to the centre of the serving plate. Spoon over the sauce and garnish with a sprig of mint if you fancy.

Here is a link to some more adventurous panna cotta recipes

http://www.bbc.co.uk/food/recipes/search?dishes[]=panna_cotta   I think I’ll give the lemongrass and coconut panna cotta a try sometime soon!