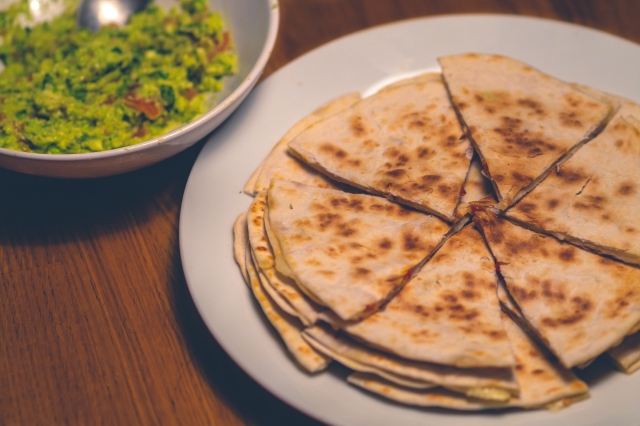 These quesadillas were described by my 5 year old son as ‘awesome’ (a word normally only used to describe lego creations).  They take just 15 mins and are really versatile.  Quesadillas originate from Mexico and are made by putting a tortilla wrap in a frying pan, sprinkling on cheese and vegetables (and plenty of other possible ingredients), then topping it with another tortilla.  Once cooked and crispy on both sides they can be cut in to  portions.  This recipe uses red pepper, spring onion, cheddar cheese and dried herbs but you could also use: other cheeses (such as goats cheese or red leicester), chorizo, ham, cooked chicken, mushrooms, tomatoes, fresh coriander or fresh chilli.  Mumsnet even has a breakfast quesadilla recipe with sausage, scrambled egg, cheese and tomato inside.  And we ate the two leftover tortillas the next day with grated cheese, grated apple and a little grated broccoli, for a savoury/sweet snack.  You can buy gluten-free tortillas.

Pile the cooked and cut quesadillas on to a plate so people can help themselves, and eat alongside avocado slices, guacamole and/or sour cream.  To make a quick guacamole mash avocado then add garlic, salt and pepper and olive oil.  And finely chopped tomatoes, chilli and coriander if you have them (not essential though).  A beer is a pretty good accompaniment too!

Any leftover tortillas can be folded and frozen in freezer bags then taken out to defrost a few hours before needed.  For an alternative and equally tasty tortilla recipe try these veggie mince cups: https://katielovescooking.wordpress.com/2016/01/21/veggie-mince-cups/

Place a tortilla wrap in a medium hot, dry frying pan (no oil needed).  Sprinkle over 1/3 of the grated cheese, 1/3 of the chopped pepper and 1/3 of the chopped spring onions plus a sprinkle of herbs.  Once the cheese is melting place another tortilla on top, pressing it down pretty hard.  Keep checking the underneath of the bottom tortilla and once it’s golden brown, flip the whole thing over so the other tortilla can brown.  Once the other side is cooked take the whole thing out, place on a plate and cut it in to 6-8 portions (a pizza cutter is easiest but a sharp knife is fine).

Repeat this process two more times until everything is cooked.  Eat the quesadillas piled on a plate and alongside chopped avocado/guacamole/sour cream.  I like to dollop the guacamole on top of the quesadilla portion.  Delicious! 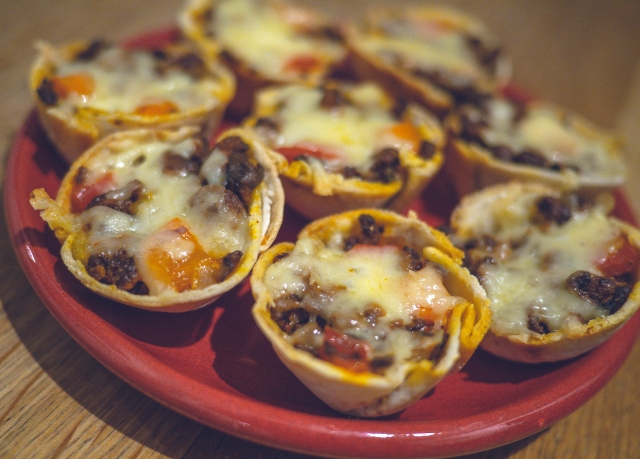 I was recently given a brilliant ‘mince cup’ recipe by a lady called Claire.  She said that she makes a dry veggie mince, lines muffin tray holes with circles cut out of tortilla wraps, fills them with the mince, tops with cheese, and cooks them briefly in the oven. Out come crispy mince cups!  I tried these with my family and WE ALL LOVED THEM.  The kids were even talking about them the next day.

We ate the mince cups hot with some peas for dinner, then cold as an after school snack. My youngest son helped fill the tortilla circles with the mince and sprinkled over the cheese. We used half of the mixture to make the mince cups, then the next evening added tinned chopped tomatoes to the remaining mixture to eat with pasta. That’s two different meals!

Claire says the mince cups are lovely with olives on top. I think adding some fresh chopped chilli and then spooning some sour cream on when cooked would be tasty too. I think you could play around with the ingredients a lot as long as any filling is not too wet! Allow about 25 mins preparation and 12 minutes baking.

Veggie mince cups (makes 16 small cups using half the mixture, then just add chopped tinned tomatoes to the remaining half to make spaghetti bolognaise the next day!)

First find a cup/glass that is a bit bigger than the holes in your muffin tray, then use the cup and a knife to cut out circles and put them in to the muffin holes. Then heat some oil in a pan and add the quorn mince, stirring regularly for about 5 minutes. Add the vegetables, dried herbs, garlic and crumble in the stock cube. Gently cook for another 10 mins or so, stirring regularly, and adding a little more oil if necessary. Don’t let the mixture get too wet.

Spoon half the mixture (or more if needed!) in to the muffin tray lined with tortillas, until full, then top with the grated cheese. Cook in the oven for around 12 mins, until the cups are slightly crispy and the cheese has melted. Eat with hands! 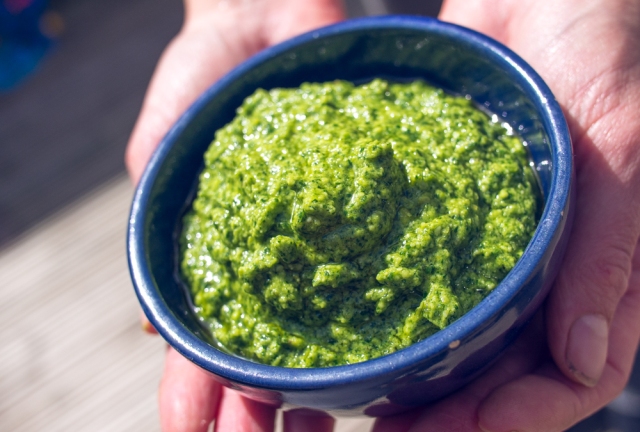 A big thank you to Noush for recommending this brilliant watercress pesto recipe to me!  She makes it every week at home because her son loves ‘green pasta’.  It was a big hit in my house too, despite my kids not normally going near watercress, because they love pesto!

It takes just 5 minutes to whizz the pesto up in a food processor and it can be eaten in lots of different ways – stirred through pasta with anything you fancy; dolloped on top of pizza; on chicken; spread on to sandwiches with salad and/or cheese, or as a salad dressing.  Watching my kids eat it is very satisfying because watercress is packed with goodness.

The pesto will last up to a week in the fridge in a sealed container topped with a layer of olive oil, and the amount in the recipe should last for around four family meals, depending on what you use it for (it’s about a jar’s worth).  Hope you like it as much as me!

1 bag watercress (or other leaves like spinach or rocket)
1 clove garlic, crushed
60g grated parmesan (I don’t always have this at home – it’s fine without it)
Generous handful pine nuts (or whatever nuts you have – I have used walnuts, brazil nuts and pecans too)
Squeeze of lemon
Olive oil

Put everything except the lemon and olive oil in the food processor and whizz it until everything is finely chopped.  Add the oil (as much as it takes to get the consistency you want) and then a squeeze of lemon to suit your taste (usually between 1/4 and 1/2 a lemon).  Season with salt and pepper.  Store in the fridge for up to a week with a layer of olive oil on top to keep fresh. 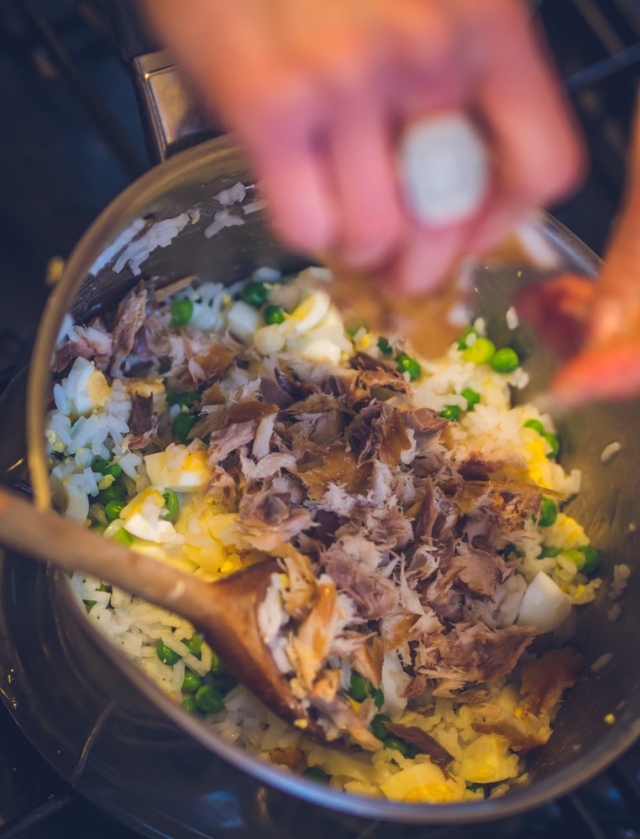 This is one of the most successful dinners in our house as we all wolf it down (including my kids, who can be quite fussy), it is quick to prepare, saves on washing up and only costs about £3.50 for the whole dish.  It is also extremely well balanced and healthy! Kedgeree is traditionally an Indian breakfast of fish, rice, hard boiled eggs, peas and curry powder that is believed to have been introduced to the UK by returning British colonels.   I have replaced the smoked haddock with smoked mackerel as it is cheap and already cooked (plus my kids love it’s salty flavour), used garam masala spice (available at supermarkets) as it is gentle and sweet so kid friendly, and added spring onions for a little crunch.  You can always use a stock cube instead of the garam masala.

Try to remove any bones while you are tearing the mackerel (the bones tend to be pretty small so don’t worry too much about this).   As an alternative to using fish, you could try canned chickpeas or cooked ham instead.  The kedgeree is particularly delicious with a good shake of sweet chilli sauce or ketchup on top!

One other top tip – smoked mackerel, peas and spring onions are also great in an omelette!

Optional – 1-2 tsp garam masala (depending on how much you like it – I use 1 tsp which gives it a mild flavour) OR 1 vege stock cube, crumbled (I like OXO)

Start gently simmering the rice and add the eggs (still in their shells) together in one pan.  Stir occasionally to avoid sticking.  After 10 mins take out the eggs and add the peas and spring onions to the pan.  Take the egg shells off and chop each egg in to 10 pieces.  After a few mins more the rice, peas and spring onions should be cooked.  Drain the mixture and add the eggs and torn mackerel.  Add either the garam masala or crumbled stock cube and season with a little salt and pepper if you like (it doesn’t need much).  Add a little butter/marge if it needs more moisture.  Mix well and serve! 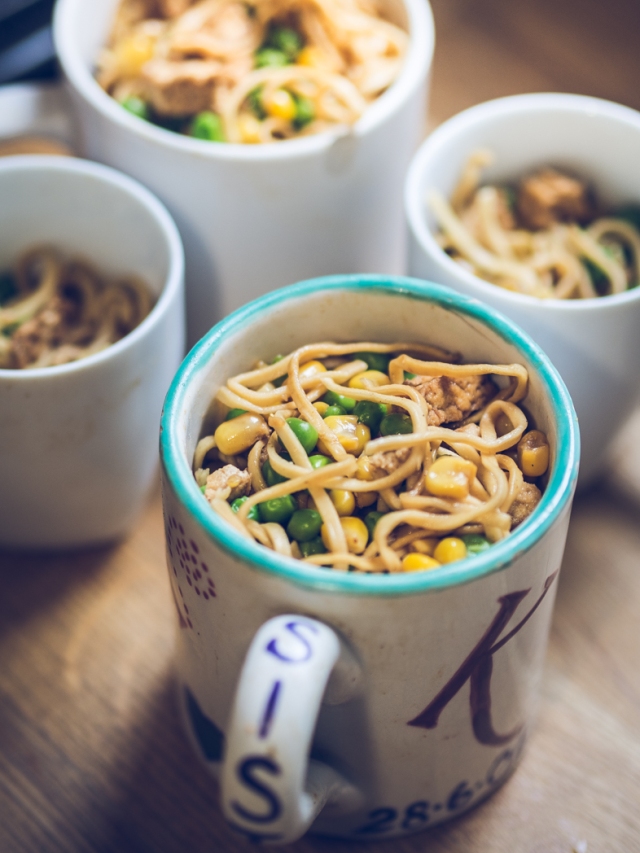 This is hardly a ground breaking dish.  But it is quick, tasty, healthy and, most importantly, has the novelty of being served in a cup!  Kids like this.  Mine really enjoyed the ‘oodles of noodles’ and even ‘drank’ the last bits out.  It has a good splash of soy sauce to give it flavour and a bit of saltiness, which also tends to appeal to kids. The possibilities to vary what you put with the noodles are plenty – instead of peas and sweetcorn you could try pepper, spring onions, carrots, broccoli or cauliflower.  Instead of marinated tofu (from a pack – delicious) you could use prawns, flaked smoked mackerel, pre-cooked sausages or chicken.

Be prepared for a bit of mess due to all those long, wriggly noodles.  In my opinion this is half the fun but you could always cut them up if you want!

Boil the noodles and peas together in a pan for 5 minutes, making sure you separate the noodles with a fork while they cook so they don’t stick.  Drain and add the sweetcorn and marinated tofu.  Mix up and add a good glug of soy sauce, to taste (be careful not to overdo it!)  Carefully load in to cups and serve.

This is one of those meals that was invented when I was using up the contents of my fridge and cupboard. My kids didn’t turn their noses up at it so it is a success in my book! They loved the natural saltiness of the halloumi cheese and the Mediterranean flavours of the capers and olives, so much so that they happily accepted the presence of the beans and vegetables. My boyfriend approved too (if you read my blog regularly you will know that he normally only gets excited by fish fingers and Rustlers burgers).

This dish is healthy, tasty, colourful and quick so makes a perfect family meal! Allow about 20 minutes to make it.

Heat some oil in a pan and add the crushed garlic, herbs, and chopped onion and pepper. Sweat for at least 7 minutes, until softened, stirring regularly. Add the chopped tomatoes, drained beans, halloumi cheese, capers, olives and crumble in the stock cube. Season with salt and pepper. Simmer for 5 mins. Serve!

Everyone agrees this is a lovely dish and it is so straightforward to make.  My friend Agnes recommended orzo (thank you Agnes!) – it is pasta but looks like rice, and has a very satisfying consistency.  It is traditionally used in soups but also works in pasta bakes and as a quicker alternative to rice in risotto.

Because orzo is so small it is handy to use when cooking for babies and young children, and in this dish the grated courgette is a simple way of sneaking in veg!  You can use other types of pasta if you can’t find orzo.  It serves 4-6 people and at less than £1 per head it is a budget meal too.  Yum!

Cook the orzo according to the pack instructions, drain and transfer to a casserole dish.  Pour in the crème fraiche/cream and add the grated courgette and lemon zest.  Mix well.  Crumble in the stock cubes and add some extra water if it needs it – you want the dish to be moist but not watery.  Add a little salt and some pepper and mix again.  Sprinkle the cheese on top.

Bake in the oven for approx. 30 mins, until just browned (I finished mine off under the grill for extra colour but you may not need to).  Serve with salad or veggie sausages.